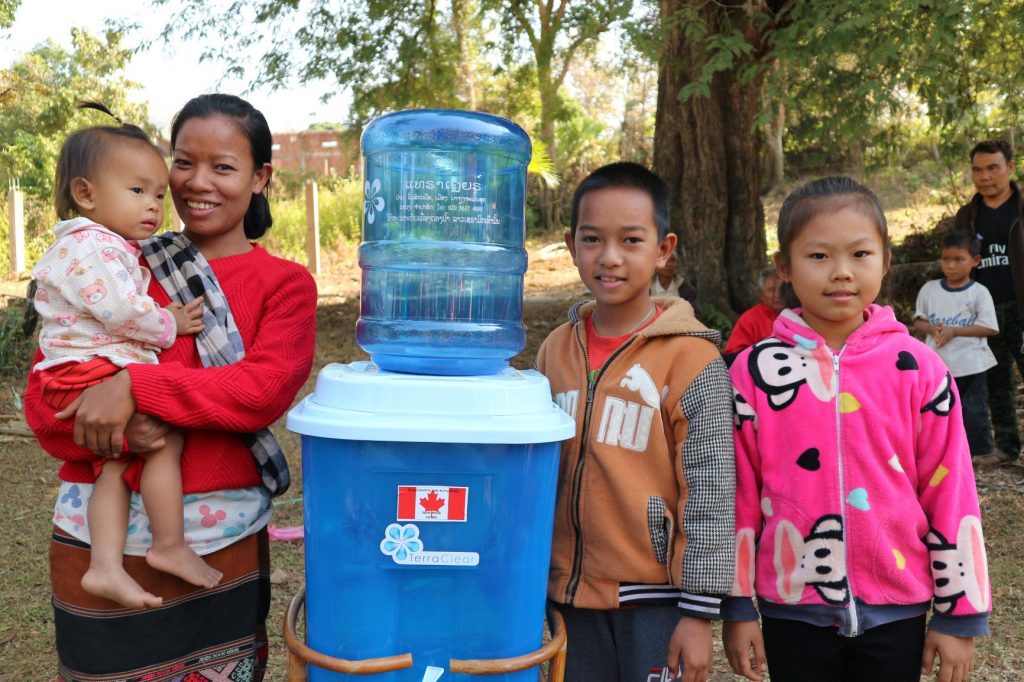 With the two main water projects (and a smaller repair) underway to supply water to SandLuangnoi and ThongLom with dams, water tanks, and taps throughout the villages, it began with another massive truckload of water pipe.

The first village of Keaup, was actually a little closer than had been estimated, in Chomphet District across the Mekong River.  The December distributions are generally a bit rushed so that emails with pictures of each receiving family can get to our donors in time for the holidays.  These pictures are often offered as Christmas gifts on honour of friends and family or in memory of a loved one.  It is also the time of year when we have fewer volunteers to do the prep work and distributions.  In fact, it was little difficult to take time out to get good pictures too. Sue Miller, also from the Whitby Sunrise Club managed to edit a video for us, provided by Rob Fraser so total credit goes to them.  Here is the link;

It was taken in the only space large enough to distribute filters…the temple.  Temples are a rarity in rural Laos. 76 water filters were distributed, including one for the temple. The Monk received the filter on behalf of the Temple. He was somewhat disfigured and it is thought he is a polio survivor

The next village visited was MakPhouk, located several hours north of Luang Prabang City and almost to Oudomxay Province.  The villagers held off their Khmu and Hmong New Year celebrations to coincide with our teams arrival.  The reception for us was certainly beyond expectations, despite being an extremely poor village.  106 Water Filters were distributed and school supplies provided to all the students. These two water filters were distributed for the primary school, a gift from Global Change for Children, located out of Vancouver, Canada Distribution of School Supplies for each student, along with soccer balls, rattan balls and net. In the foreground, Siphan is handing out small cans of fish that will serve an entire family for a meal.

Here is a link to a facebook video. Credits to Rob Fraser and Sue Miller!

The next day was a pretty rough ride for about 2 1/2 hours from Nong Khiaw, to the Village of PhaThong.  It started off as a very foggy day but upon arrival the sun was very bright and very hot…trying to find shade was an impossible task so once the filters were ready for distribution, the pictures of each family were taken inside the community centre…even so lighting was a challenge.  94 water filters distributed here. Lots of sweat in preparing these filters… The team was honoured with hand-made bags.

This is amazing what your are doing