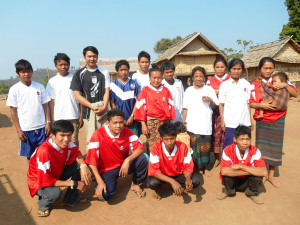 On one of our trips to the rural villages, we stopped by a family home in Nong Ein, where we had left building materials last year for the construction of a toilet. It was a large family and the two elderly parents were trying to support a family of 14 including two orphans with whom we are sponsoring to go to secondary school. We supplied only enough to do the toilet, base and sceptic system. Here is the result. This is the father of about 14, very happy to show off his handiwork.

We continued with our Canadian Friends and several others to the poor village of Katang Xieng. The mission? To install solar panels into as many homes as we could. It turns out that we were able to light up 7 houses with two teams. Due to very poor living and hygiene conditions, and no water source for the village, we didn’t want to stay overnight.
I wish we had the foresight to take an amazing shot that we missed. There was an elder watching us and when we were done, he pointed to the switch on the wall and wondered what it was. You should have seen the look in his face when we gave him a demonstration! When we went back to install more panels, I did manage to get a shot of his daughter and granddaughter (he wasn’t there). She was so thrilled to be able to switch on the light at will.

Later on when we returned to the village, we took a lot of donated sport shirts with us. Renee and Peter brought them from Canada on behalf of the sponsor, associated with Afrisoccer. I had wanted to provide clothing to this village for a couple of years now…so many kids running around without clothes and the adults and just tattered clothing. These are by far, the best clothes that these villagers own!

We stopped in the village of PhonSavanh to check on the large water project and discovered that other than some drying cement at a couple of the tapheads, it was done! In total there were two dams, 50 taps (13 old ones plus 37 new ones) and over 9km of pipe! The villagers helped with the cost too! They are so happy now that they can also build new homes and toilets too, with thanks to so many Rotary Clubs and other sponsors. We have changed their lives. Here are some highlites. One of two dams. No need to go to the polluted pond to wash clothes and bring water back to drink.

We also delivered the last of our water filters, all to schools. Our last stage of distribution and training was to 5 schools. In total 525 were distributed this year, to a grand total of over 1200 systems including 7000 people!

0 Comments on “Toilets, Light, and Water”

Great memories Steve, and i know for sure your efforts and coordinating of funds and manpower have made a huge difference to many Laos people. Take care Pat On 06/03/2014 8:37 PM, “Adopt A Village In Laos” wrote:

> adoptavillageinlaos posted: “On one of our trips to the rural > villages, we stopped by a family home in Nong Ein, where we had left > building materials last year for the construction of a toilet. It was a > large family and the two elderly parents were trying to support a family of > 14 in”

We hope to see you back here one day! We delivered some dental supplies a couple of weeks ago, to the hospital, you so graciously donated items for. To our surprise, there was a full dental chair with suction, water, light. There was also an amazing sterilization unit..enclave! AND, they are building two more buildings to house patients.