It’s Great to be Back! 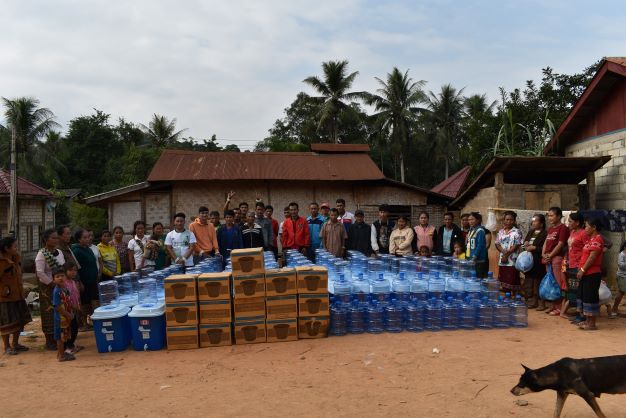 After a very challenging 3 years, it was incredible to be back, doing what we love most. It took a little longer this year to get settled, plan out our season and get started with the projects. Our coordinator had been very sick for the better part of a year, but three trips to Thailand finally resolved the health issue and Siphan continues to regain his weight back. Western food seems to be helping too!

We started this year by hiring additional staff to support our projects, and to assist with functions that are becoming more difficult for us to do, as we age. The training process is progressing slowly but in the field they are champs.
Our first field trip was to distribute water filters and school supplies to Phouthidpeung primary school, after a drop off of filters to the river port at Nong Khiaw the evening before. The truck was a day late arriving and was overheated by the time it arrived there. It arrived so late that the boat driver had to sleep in the boat overnight. First issue…half of the ceramic elements were missing from our order…an expensive issue to deal with because it meant we would have to go back to that village at a later date. The following morning, we headed to the primary school to distribute more water filters and school supplies. The water filter truck broke down only 30 minutes after leaving in the morning from Nong Khiaw. Three of us were dropped off at the school while the rest returned to the truck, organized three other trucks to load filters from the broken truck…we were not impressed…another major delay! One of three trucks to empty the big one.

Meanwhile the rest of us took the opportunity to distribute the school supplies at the school as we waited. The temperature was 10 degrees there plus a stiff wind blowing in the mountains…we weren’t expecting that and nearly froze. The teachers and the students were freezing too! Most of them didn’t own a coat…more later on this. Finally, 2 1/2 hours later, Siphans truck arrived with the filters for the school. As the training was just finishing, a second truck drove by with filters heading towards the next village of Houey Keung. There we distributed 83 filters to some very happy villagers! One of our favorite visitors decided to to join in the picture for one of several filters she donated.

After a nights rest at our guesthouse, we had to back track a little. Due to the truck delay, we had to rearrange our schedule (along with several calls to the villages to rearrange the dates and times) and headed straight for the boat dock. About two hours later, we arrived at Hatkham and distributed 120 water filters. Filters going through final inspection before the onslaught of villagers. Headmaster with some of the students receiving school filters

We spent the night in Muang Ngoi, with our last stop located just 15 minutes away by boat. We planned to leave immediately after breakfast so we could do the distribution and get back to Luang Prabang on the same day. However, our plans changed quickly when we found out that they had closed one of the two gates of the dam upriver and the river was far too shallow to navigate. The gate was opened in the morning but it took hours for the water levels to rise. After a two hour delay, the guys wanted to go anyway but refused to let us go, citing that it was too dangerous for us….Geesh! They did get there but not without carrying and dragging their boat through the shallow spots. We waited another two hours, as we watched another two boats leave. Figuring the river was finally high enough, our boat driver decided to give it a shot. Low and behold, we found the two boats stranded on a berm so we docked beside them. Eventually we were able to move again. By the time we got to Soupkhong, our staff had just finished the training and distribution…All there was for us to do was celebrate with the villagers and be honoured through a Baci ceremony. Our team heads off in a small boat to try to get to the village…and with life jackets. New Filters and ceramic element replacements for the villagers. They were proud that we never forgot them. One of our families receive their water filter