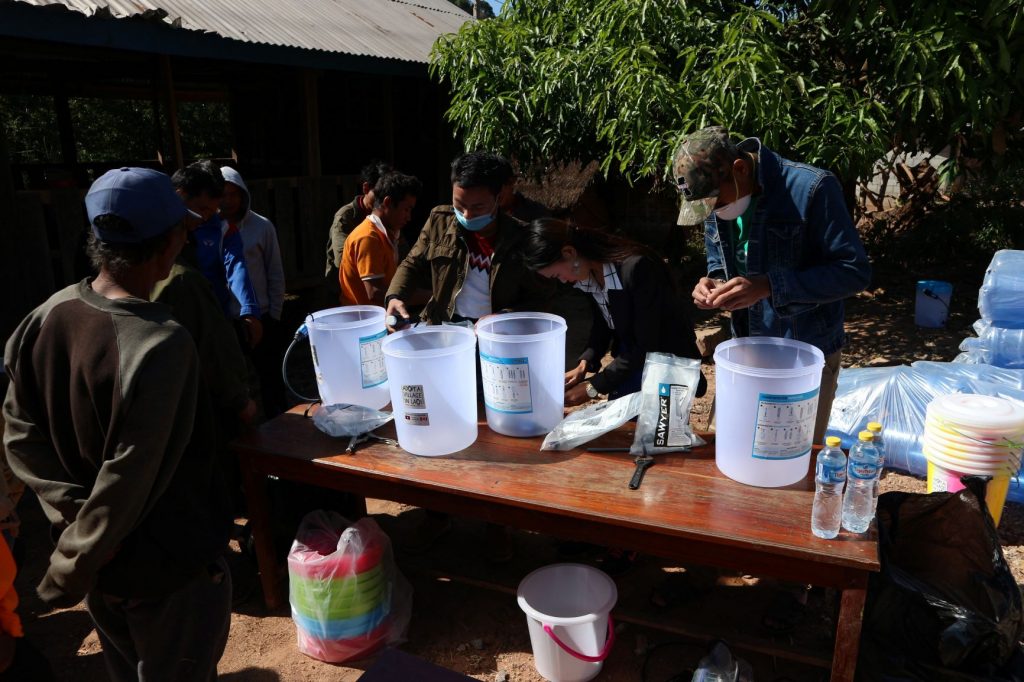 David, from the Rotary Club of Orillia, and past visitor to Laos (last year) has been researching a different type of water filter on his own for rural villagers, hoping to supply a lower cost alternative than the one AAVIL uses.  There is a little more work in preparation of the filters themselves and certain pieces are sourced locally, but most of the prep work can be done before heading to the village, which is a great time saver too.  The goal is to find a lower cost solution so that more water filters can be distributed each year.  So this is a pilot project to see if they can withstand the rigors of daily use by the village families, especially the children.  If successful, the next phase (next year) will be to determine the cost of transportation and customs clearance into the country with larger quantities than the 60+ units he brought with him in his luggage.

David raised his own funds from family and friends, and donated a considerable amount of his own money towards them so we are certainly thankful for his support. Our students, looking for extra income are taught how to complete final assembly of the filter units The holes were drilled, stickers attached before the pails left our house…a huge time saver! This is the finished product (not including the bottle that was also supplied) Villagers listening to every word during the demonstration. Two students who assisted in the work for the day. They were very eager to take on whatever needed. David demonstrates the simplicity of the filter usage. …and continues with the backwashing element to the training, to keep the filter clean. Of course hygiene training is not complete without teaching about how easily bacteria spreads. Using colourful sparkles to represent different bacteria, and watching all the villagers wash their hands in the same water as they all do, it was clear to them, just how quickly germs carry to the next person, even if they aren’t sick. Now it was time to ask the skill testing 5 part question. Normally I would have given out free t-shirts for correct answers, but I discovered the ones I had were way too large to give out, so 10,000 kip was the solution ($1.25). You wouldn’t know it, but they were a pretty happy village to receive the gift of healthier living. They sure were jovial before and after the picture. One of the receiving families posing for the picture. They also received toothbrushes and toothpaste – this was supplied by the Rotary Club of Oshawa.

There has been a rather frigid cold front go through the country for the last few days. In Luang Prabang, nightly temperatures have dropped to 4 degrees at night (colder to the north).  With no heat in the huts and houses, or insulation in the walls, it isn’t long before the inside and outside temperatures became the same.  As such, we hurriedly supplied blankets and warm coats for any student that asked, whether they were our own supported students or not.  Poor kids were just freezing!  How could anyone deny them?  Fortunately normal temperatures will begin to recover in a couple of days. Bang (left) and Bounsom (right) are two of our students near Ban Na Lea – last year of high school.

Yesterday a Lao Canadian, living in Ancaster, Ontario visited Luang Prabang, after coming in second place for her age group during a marathon in Vientiane, just the day before.  She came to Luang Prabang to meet relatives that she had never met before.  It turned out that her uncle lived just four doors from the hotel where she is staying, and another right around the corner.  When Vanh went inside their home, she saw a picture of her grandfather on the wall.  Lots of emotions to be sure…. It was amazing to witness this tearful meeting. Vanh is on the left.  We love stories like this!