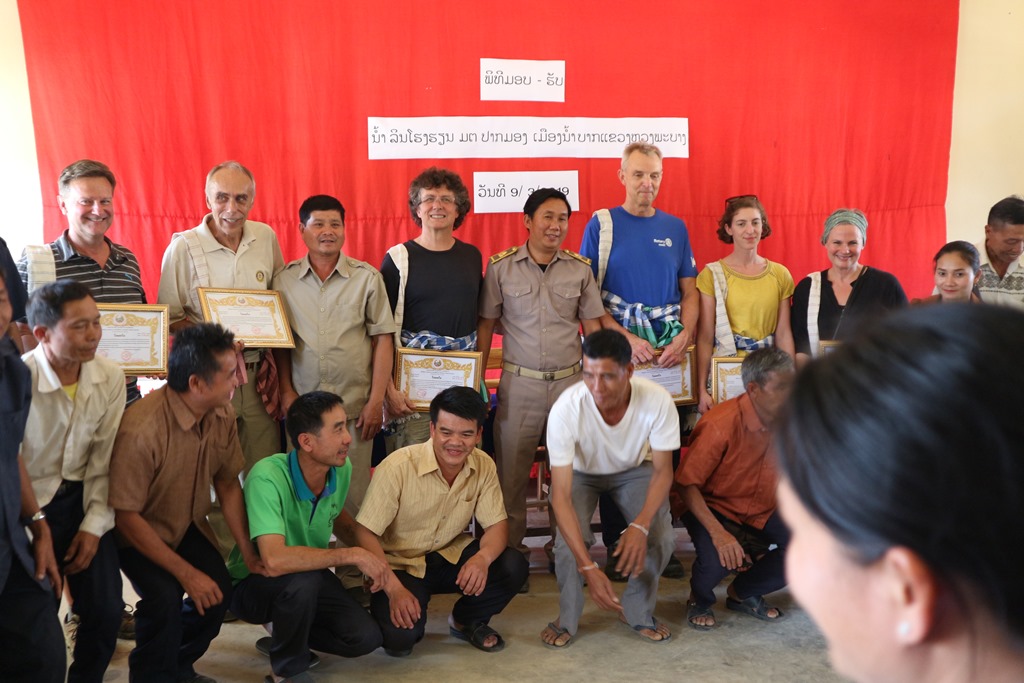 During this last week, we were visited by another group from Canada, just in time for the celebration of the conclusion of our second large water project at Pak Mong Secondary School. The official pass-the-torch, or shall we say pipe wrench to mark the handover of the project to village and school officials. From left to right; Village Chief, Primary School Director, Secondary School Director, Steve, Director of Hygiene for Nambak District and Engineer. Primary School Students performing for the guests of honour Then it was the Secondary School Student turn at dance. …and a baci ceremony. The students had been sent home with roast goat to share with their families for lunch, as thanks from the charity. It is they who did all 5km of trenching and burying of the pipe. At the back, we had added a second pipe to go to the village also. With not enough water in the village, this output pipe was located about half a metre about the pipe going to the school so the school wouldn’t suffer from the village using all the water. We were only aware that the village didn’t have enough water during the final stages of construction. The sign’s final resting place, mounted to the school wall.

This water project was made possible from a special grant from Global Change For Children, the Kitchener Grand River Rotary Club, the Ancaster Rotary Club, 8 clubs from Rotary District 7070 including Ajax, Bowmanville, North Scarborough, Pickering, Richmond Hill, Scarborough, Whitby Sunrise and Uxbridge.  We wold also like to thank a Malay Group from Johore Malaysia, Kevin Hope In Loving Memory of his wife, Fay, Renee and Peter McLachlan and Dave Henderson for all of their support.

We headed into the very rural village of Dock Lao, only accessible by truck or tractor.  We opted for the truck of course. From left; Bounsom, Pierre, our driver who couldn’t take the minivan, Kevin and David. The rest of us stayed in the front.

Dock Lao was perhaps our most unusual village in the more than 45 villages we have distributed water filters to.  They were extremely grateful and humble. but a large percentage of them were blind.  While the pictures were taken, 11 people of the 65 families were blind (at least one blind eye), 2 had medicated strips on their foreheads and one child was mentally challenged.  Even the person who performed the baci ceremony was legally blind and was only 26.  Siphan mentioned that his diction was above and beyond the elders abilities with the traditional Khmu language. I wish we could find out more about what has caused so much blindness in this village.  It could be hereditary.  We also noticed that their main crop is the sap from specific trees, or resin.  Siphan confirms that it is used as glue or an additive to glue, so one can’t help wonder if the way the glue is extracted from the trees and prepared for shipping.  They generally scrape it off the outside of the bark and bagged for shipping. It is the villages primary cash crop and funds used to bring electricty and a road several km to the village. Both Mother and Daughter are blind. Filter for the primary school

On the way back we stopped at a central location for distribution of another 22 water filters at Siphan’s farm.  Each of these villagers lives outside the village, likely nearer their rice fields. Do you think this fellow seems grateful?

With the last of our guests pretty much gone for the season, we are now busily doing the bookeeping, preparing a series of reports and reviewing the many requests we have received for assistance.  We received another 10 requests yesterday for water related projects and have heard there are more coming…a tad overwhelming.  Our cutoff is just a week away for requests for next season, because our own deadlines are looming.