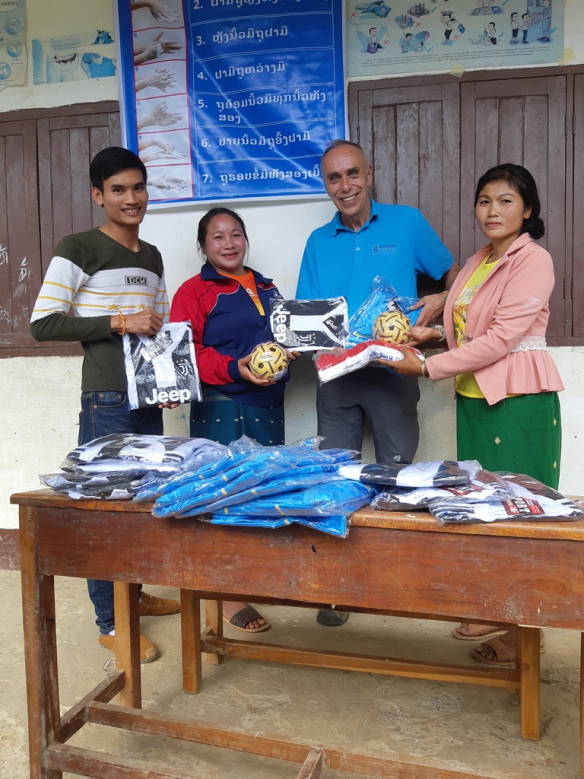 With so many requests coming in, each requiring a site visit, it is so easy to fall behind.  During Mike and Daniels visit, they were sent off on a boat trip to see Muang Ngoi on the Ou River.  It had been a few years since Mike had been there and it was a beautiful day, so it gave us time to visit three other villages in order to review their requests.

For the first village of Nong Ein, where a small number of uniforms were dropped off to their small primary school.  This would allow them to compete in the primary school sports championships in Nong Khiaw coming up next month.  Uniforms are inexpensive here and without them, this poor village simply would not be invited to compete. Two rattan balls and a net were also donated. The team will be playing rattan ball and soccer against other villages in the Ngoi district. Sadly, many other rural villages will not be able to participate because they don’t have uniforms.

The second village we visited was actually just south of Nong Khiaw.  As we arrived we had seen that portions of the riverbank and road had fallen into the river (August monsoons).  There had been a temporary fix for one larger section, certainly not enough to withstand another monsoon.  In the other section, one lane had dropped out – the only protection was five or six skinny saplings in bright green bags blocking the lane that had fallen out.

The villagers have asked for help as we walked about 300 metres at the side of the road and climbed through the barrier fence to review several properties.  There was almost no property left.  Their entire property was pretty much washed away.  Imagine your property being 20-30 metres deep, all washed away except 3-5 metres (where the road wasn’t washed away too). It is difficult to understand the magnitude of the damage but here you can see a small island to the right of the picture – there was no river there before.  It wasn’t particularly easy keeping one’s balance on the edge either. This is a slightly better view – the tree stumps used to be on the land owned by villagers. This was taken near the edge of the lane that fell out into the abyss. You will notice in the top left corner, new water pipe that has been run, supported by temporary cable.

We visited a third village that was particularly hard hit, even more than this one. As we approached the village, there were so many mudslides, visible by the lack of growth on the sides of the steep hills.  This village lost several huts into the river and 41 others had serious damage where they could no longer live there.  Fortunately the villagers heard it coming and evacuated so there were no deaths.  The government has since cleared a piece of land that they would like the villagers to move to, since the whole village has to be relocated but in our view, it is just too low and too close to the river itself.  The villagers are very nervous about moving there.  In addition, the local graveyard is located right above the cleared area and villagers are worried that their ancestors will wash over the village.  We have decided to put them onto our list for water filters when additional funds are raised and will wait to see how things progress before committing more funds for additional projects there.