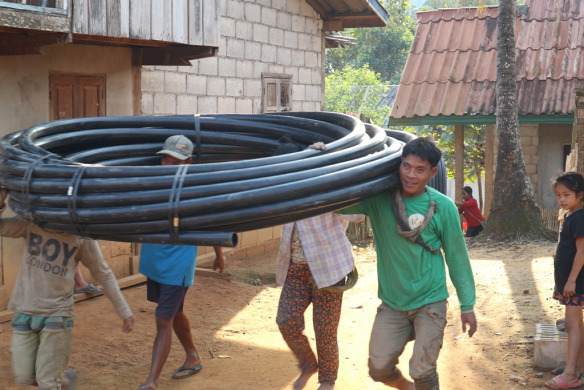 Since arrival in Laos in December, the organization has been inundated with requests for repairs or full replacement of their village water supplies.  With over 30 requests to date, it is disheartening to know that only a few villages will receive help this year, being the only NGO in the Districts where most of our work is done.  Mother Nature has not been kind to them.  Travelling north of Nong Khiaw, the resulting damage is even more widespread, and at each turn, markings of another mudslide has changed the landscape.  As such, our mission had never been more critical.

During our most recent trip, we took friends, Mike and Daniel with us.  For the first stop, rolls of pvc pipe, connectors, tools, cabling, steel rods (reebar) and cement were loaded onto a boat in Nong Khiaw (about 4 hours north of Luang Prabang).  From there our group transported it to the village of Had Huan.  In the village, a preassigned group carried everything up to the community centre.  It was amazing to see 50kg bags of cement being carried up the very steep riverbank. Yes, three women dragging reebar up the riverbank. The men carried the 50kg bags of cement. It was quite a struggle to fit the rolls of pipe in between the houses. Three of the cement handlers taking a break – they are small but mighty. We took a walk to their water tank and something instantly stood out. They had built a second water tank (with the guidance of an engineer a few years ago). It was built higher so that the higher part of the village would get water also. The crazy thing was that they ran a pipe from the bottom of the higher tank to the top of the lower tank using the same output location. So while the lower tank is full all the time, there is nothing in the upper one. Duh! This is just one example of poor engineering. We will fix that of course.

We visited several places but this one had been promised a visit several times.  Rain kept postponing our trip due to the high river that was in between us and the village.  The only way to get there for all of us was by tractor and road itself was surprisingly good. The first part of the ride was quite short to the suspension bridge. Siphan showing us the wobbly, uneven, span of the bridge. Several slats were broken or missing so special care had to be taken with every step. This bridge is also used for motorbikes. Meanwhile, the tractor was driven through the river… Glad the group walked across the bridge or we would have been pretty wet.  One more hour on the tractor to the village to review their urgent requirements.

We wasted no time in getting right into discussion with the chief and other villager elders.  The job will be a little bigger than thought.  First, the existing tank is much too small for the village, but the main issue is that their dam is totally destroyed from yet another mudslide.  We will have to make a choice.  We can build a sister tank and rebuild a similar dam slightly further up the same river, at a lower cost, or build a dam 4km away in a much larger river and of course at a much higher cost.  We are waiting to discuss with the engineer, but if the engineer decides it needs to be the latter choice, the villagers will have to wait until the next season for us to raise enough funds for it. This gives you an idea of the widespread flooding that happened during the monsoons. That was a rice field, now covered by logs and trees that floated into the area from the mudslides.

There will be more pictures of the other places visited in our next post.