Off The Ground and Running 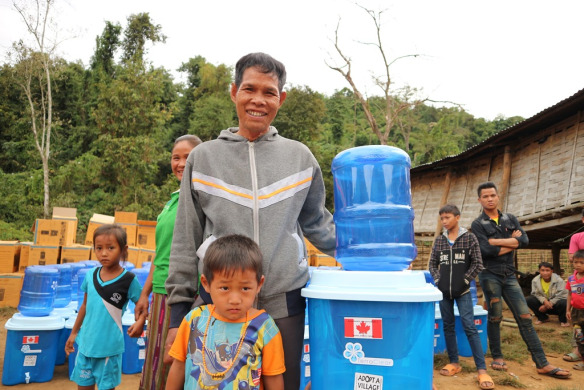 No sooner had I arrived to Luang Prabang, and we were off the ground running.  We needed to complete our first village before our guests were to arrive, in order to meet the Christmas rush for pictures of the families receiving families that our generous donors had requested.  The village of Phousoung in the Nambak District of Luang Prabang Province was going to be too much for newcomers to ride on a tractor.  I am glad they didn’t join us, for their sake.  With a two hour minivan ride, short trek to the river downhill, a boat trip across the river and another short trek to the first village, we endured a 3 hour tractor ride…both ways of course.  With bad backs and sore butts, it was hard to sit down for two days afterwards… We did the village in two parts because the village was separated by a half hour tractor ride.  During preparation of this part, it started to rain so we moved everything to a house under constructon…only the roof was done so it was perfect.

This is the second part of the village.  Take a look at the hut next door. Yes, the entire house is on a significant angle – One can’t imagine sleeping there but there is a large family living there. This was donated on behalf of the Trafalgar Castle School by The Rotary Club of Bowmanville, as a speaker gift.  What a gift for this family!  We distributed to 120 families here.

A couple of days later, our visitors Jane and Frank Tilley arrived from Collingwood, Ontario, Canada. Both black bags at the bottom of the carts were crammed full with toothbrushes and toothpaste, courtesy of a large bridge fundraiser held by Barbara Seagram and Patti Lee who raised about 200 water filters!  These are only SOME of the toothbrushes and paste.  Now let’s see if our charity has lived up to their expectations!

We took it easy on the Tilleys for the first couple of days but before long, we were off to the first scheduled village of Nakeau, located about 1 1/2 hours from the Mekong Boat crossing at Luang Prabang.  The road was surprisingly good, even the last 11km on a dried mud road, except for a couple of patches.  This was just a day trip where we distributed filters to 61 families. 61 water filters ready for distribution…but not until after a hygiene course. This is where we will hold the celebrations at the end of our distribution…rather inviting don’t you think? One of the well dressed villagers bringing out the centrepiece of the baci ceremony. The completed masterpiece. The spend a considerable amount of time preparing this as a small gesture of their thanks to us.  It should be noted that the fellow in the blue shirt at the back, came to help us distribute the filters – his father (past chief and friend from the first village we helped) is gravely ill and we are considering sponsorship of the rest of his university course, with only 1 1/2 years to go. What would a blog be without pictures of the kids? Our return trip across the Mighty Mekong River.

The next morning we were off on a three day, two night village trip to the north and into our focus area.  The first stop was to Nong Khiaw for lunch, then river boat to Houay Han.  This village had already agreed to host the Khmu New Year for 7 or 8 villages.  Since then, the monsoons came with devastating damage to so many villages.  Only 20% of the rice crops for this entire village were saved and their water system severely damaged.  As such, we delivered the necessary materials to get them up and running again, although we knew it wouldn’t be in time for the New Years, scheduled just two days later. We are standing in front of some much needed pipe. The cement, connectors etc. are actually in the room behind us for safe storage until installation.

In our next village we distributed 91 water filters and it was planned to coincide with their Khmu New Year so most of the villagers were dressed up in their traditional Khmu outfits.  They generally wear these outfits once a year. The students perfromed traditional dance for us. There was lots of dancing by everyone and lots of food.

In addition to another Baci, we were presented with framed certificates of thanks and hand made brooms. Today is Christmas Eve, so it was nice just to enjoy Tadse waterfalls with the elephants.

Christmas Day we are heading to Nakeau again, but this time as a bit of a surprise to them.  They gave us the last of their scarves from a loom that was destroyed last year by termites.  We have a new one for the village, and a starter kit along with lots of extra thread.