Final Villages Trip for the 17/18 Season 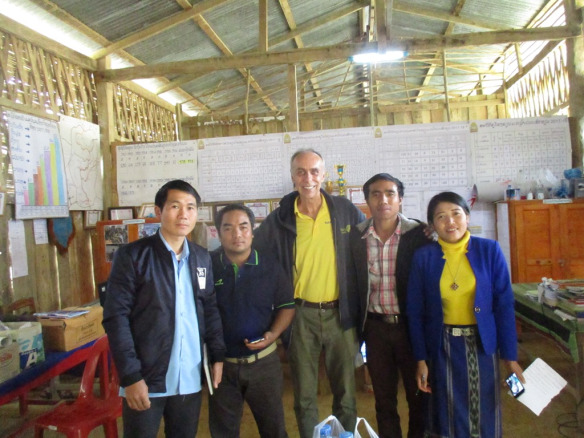 It has been a bit of a scramble to fit in the last of the commitments for the various projects. Plus, with our budget starting to run low we squeezed everything in one last trip to the villages, before my return trip to Canada and our next fundraising campaign begins for the 2018/19 season.

First, we decided to head to Mok Kok (pronounced Moke Koke) Secondary School and village located way off the beaten path.  This was to review their requirements for a permanent water supply for next year.  As we got about halfway, the village chief called us to say it was pouring rain there and suggested we cancel the visit for the day – the mud roads would be impossible to navigate, so instead we continue north along the main road past Nong Khiaw to another secondary school located in the highlands. Secondary School girls are thankful for their feminine pads. 146 female students. We try to visit quarterly. Many of these girls would have stopped going to school during their monthly period and some would even quit school so it was nice to see so many female students there.

Afterwards, the teachers were eager to play boon (Khmu) with us (or patung in Lao).  I hadn’t played in about 10 years.  Siphan and I won the first game (thanks to him, not me) and lost the second game (thanks to me). We headed back to Nong Khiaw for the evening, since the rain had pretty much stopped us from going anywhere else.

Early the next day, we took the 2 1/2 hour journey to Mok Kok, and were lucky it didn’t rain, although there was still lots of mud everywhere. Beside me are three english teachers and the school director. This is their shared office and dormitory at the secondary school.  Note the bamboo walls.

It should be noted that only 6 out of 17 teachers are actually on salary. The fellow (husband of the lady) still is not on salary, after 8 years.  So both are living on her small salary.  I did a video clip about the proposed project and will share it when it is edited into the main video that is being prepared.

From there, we headed straight to Ban Xiengda for a quick lunch and to inspect the completion of the project.  They still have a fair bit of pipe to bury but at least everything is operational and working well. One of many newly constructed tap towers. They prefer this height so the younger kids can reach the tap. Our amazing donors! This sign will be permanently mounted near the entrance to the village. The water tank, now completed – I took a peek inside and sure enough, it was full of precious water for the village. We took the truck as far as we could, then hiked down to one of the dams. There wasn’t quite enough pressure from one, so a second one was built. The three compartments hold various sizes of gravel – more like rocks in the first stage, followed by smaller stones and then fine gravel in the last stage. The wooden gate is pretty much closed during this time of the dry season. The chief assigns maintenance duties for regular cleaning and inspection. There were a lot of hills and valleys during this 5.5km run. The water line is suspended by steel cable supported by cement posts on either side so that the pipe doesn’t get damaged or washed away durng the monsoon season.  This had just been completed about an hour before we arrived.  I guess the engineer wanted to make sure we would pay him in full.

A few years ago we had seen the results of a water project that was completed by another NGO.  They ran the water pipe right through the river…and of course it was washed away during the first rainy season.  As a result, that village no longer had water.

With just a couple of weeks to go, we are busily completing a whole series of documents and closing reports for our many selfless donors.  Through so much amazing generosity, over 4,000 more rural villagers (this year alone) would be without hope of a better future.  Rotary Clubs from Southern Ontario, Gravenhurst, Lunenberg Nova Scotia, plus Ladner, Coquitlam Sunrise and Tsawwassen from the British Columbia west coast were the primary sponsors of the water projects.  Many, many more private sponsors and Friends of Rotary, plus Rotaract has helped us to help so many.  The prayers of thousands have been answered.  Thank You!

In a few days, I am off to Cambodia for some dental work, then on to Canada.