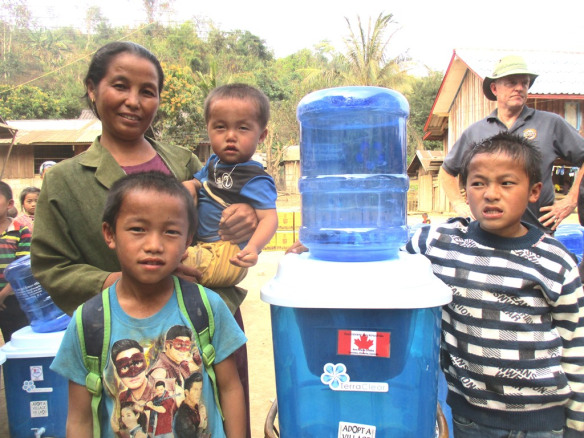 The excitement was in the air…at least for me. 3 couples arrived from our Whitby Sunrise Rotary Club after waiting for so many years!

I had prepared an itinerary for them of course – I think it may have been the first one that I didn’t have to change on the fly, due to accessibility, road, coordination and weather issues.  That in itself was a pleasant surprise.

We took it relatively easy for the next day-and-a-half, spending time in Luang Prabang City and Kwangsi Waterfalls for a swim.  I knew the next couple of days would be long, even though they are a slightly younger group and up for just about anything.

The next morning we headed north and then west to the distant rural village of Huey Yim to distribute 142 water filters.  It takes a good three hours to teach and distribute so there wasn’t much time to waste and since the drive there was about 2 1/2 hours, plus we needed to be back by dark.  I wish I had managed to take a few more pictures but my attention was drawn elsewhere. As you can see, smiles didn’t exactly come natural to everyone. The Team (L-R): Driver’s son, Siphan, Debbie, Mark, Second Chief, Barry, Third Chief, Steve, Kerry (hiding in the back), First Chief, Jeff and Sue.  While it doesn’t show in the picture, the mostly Hmong Tribe were all smiles when it came to accepting a gift for better health and longer life.

The next morning we headed off to the mountain village of Phoukou, the location of our Rotary club water project for the year…another very busy day!  This was a much bigger celebration because the official day for a permanent water supply had finally arrived and the village declared it a holiday so that all would attend the celebration.  This was wonderful because it meant we could get water filter pictures with entire families (rather than just one or two members, as with Huey Yim where most of the family members were in their rice fields, preparing for the upcoming season).

We started with the filter distribution for 83 families.  It turned out to be a bit more challenging with the entire village population there, but, you can see the results. Barry, Kerry and Jeff joined in to the picture, for HMA Insurance, who sponsored the filter (and many others).  The average Hmong family size is not less than 6 – often around 10-12.

While it was going to be a late celebration, we knew we would lose the kids quickly, so we did a distribution of school supplies and canned fish for each student of the school, along with rattan balls and net, and a frisbee. It started off quite orderly. But soon, it was utter chaos! We couldn’t tell who were students and who weren’t. Fortunately we had enough supplies. It should be noted that all of the school supplies were donated by our amazing visitors, as with the Vancouver Rotarians the previous week.

The village was extremely grateful, but did have one more request for us.  They are sending a formal request to build a school there.  I am told that many of the classes are held under a tree for the year 1 and 2 students because they can’t walk the distance uphill to the upper section of the village, around 4km away.

Next up was the celebration and ceremony. While the lighting wasn’t great under the bright sun, certificates of thanks were provided to us for the Rotary Clubs of Whitby Sunrise, Bowmanville, Adopt A Village in Laos and Siphan, with whom, made it all happen for the village.  There was also the pipe wrench transfer to mark the official closure of the project. After the offical Baci ceremony, there was a lot of food. The chief had strategically placed a goat head in front of me! I had thought it was as a religious or symbolic gesture but it was more than that.

Debbie had just got over her urge to wretch when they tore apart a cooked chicken and gave the offerings to us and our team had just left the dining area, when I got called to return.  Thank God Siphan was there.  They had split open the head of the goat and were scooping out the brain, followed by the forwarding of the first scoop directly to my mouth.  I was having none of that of course and somehow, I managed to redirect the spoon to Siphan’s bowl, who ate it with sheer glee.

We continued the celebration with Beer Lao and cheered with the village families as we slowly worked our way through the crowd, then headed up a relatively small hill to the water tank. I am sure the entire village would have climbed up there to be with us, if there was space.

Our work wasn’t over though.  It was time for some sweat equity! We levelled the ground for the last water tap tower and this picture identifies exactly what I do best!… Pretend to manage the workers…lol This was a great shot of Barry’s handiwork. Needless to say that the ground was very hard – the workers used hoes as Barry tried to use a shovel….perhaps not the same quality we use at home… As part of the ceremony, we presented the sign to the village. They will mount it with a roof over it ar the entrance to their village. Thanks to all of our very generous Rotary sponsors from three different districts and from some very special friends.

While we were preparing the site for the last water tap, the wood forms had just been moved into place, in preparation for the mixing and pouring of cement.  I had been watching the heavy clouds form and could see rain in the distance.  Being in a mountain range, rain was easy to spot. The engineer came to Siphan and I, and gently suggested that we may wish to leave because the rain was headed our way.  It was warm enough and the rain in itself wouldn’t have been a serious issue, but we were reminded that the rain looked heavy enough that the road down the mountain was likely to be impassable!  That was all we needed to hear.  10 minutes later we were waiving our good byes to the villagers.  We actually made it down the mountain and onto the main road before the rains came….and boy did the come…in torrents.  By that time, we were only 15 minutes from the guest house.  Barry complained that a little bit of his shoulder got wet (he was against the back of the cab) and Jeff mentioned that his feet got a little wet (seated beside Barry).  The rest were absolutely drenched!  One of our guests did take a picture, and here it is.Thanks Mark for providing the picture. Do you think this is inhumane treatment of our guests? Sue and Kerry still have smiles…or is that clenching?

During the last day in the villages, I wanted to focus on the culture and beauty of the north so arranged to drive to Nong Khiaw, had breakfast then headed to the boat dock.  From there we travelled to Meung Ngoi, checked in, had a refreshment and then headed further upriver to the location of the dam, under construction. Enjoying a refreshment along the Ou River in Meung Ngoi with a great group of wonderful friends…note that Debbie had her secret little stash of rye in he mug, rather than Beer Lao…

Since river traffic was closed, a tuk tuk took us around the dam to another boat, driven by the Hat Kham chief.  It was pretty small for the group of us and very low on the water.  We noticed Mark was helping to bail the water out as we took the short journey to Hat Kam Village.  (We took three boats back) The scenery along the way was breathtaking as always and our visitors took a lot of pictures. Miss Lai received the highest marks of her school and was invited to write an exam for the title for the District. Diana rom our Vancouver Group left some gifts for Miss Lai for me to deliver. As an award for her achievement, we also gave her a $50 US bill for her to cherish.  I doubt that she had ever seen one.

In addition to the scenic boat ride, I had wanted to get an update of the condition of Hatkham village – it had been a couple of years since I was there last and there has been a lot of progress, with the village plan to move to their new village location starting August 1st.  The dam developer is currently building new housing for each family, along with a school, water supply and electricity.  I didn’t ask but it is also normal for the developer to build cook huts and outdoor latrines for each family too….a vast improvement to what they have now.  It is expected that within two years, the school we built will be 75 feet under water in the planned reservoir.

After a night in Meung Ngoi, we headed back to Luang Prabang, stopping at Siphan’s fish and goat farm along the way.  Once In Luang Prabang, we enjoyed a farewell dinner together.  I sure miss them.