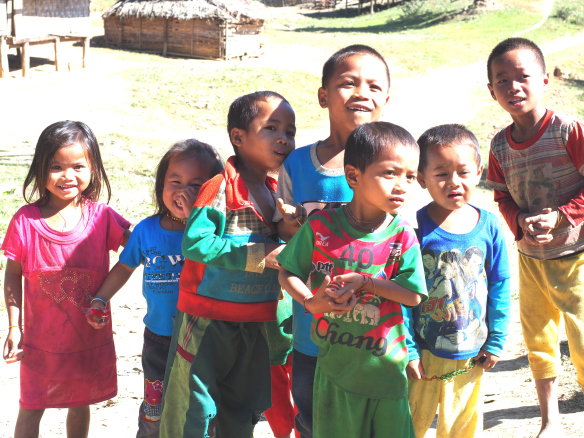 With our fundraising season pretty much wrapped up (although we are still trying to raise funds for another 18 water filters to be able to do 7 complete villages (3100 villagers), I sit here in Luang Prabang City with a hoodie and jacket over the hoodie along with numb finger. It is the heart of their winter season which will last only a few days this year.  Last night the temperature dropped to 5 Celsius – wouldn’t be bad at all if there was heat in the houses.  It is slowly starting to warm up inside though.

This season we hit the road running with our first filter distribution to two villages, just four days after I arrived.  Ron Postma from the Rotary Club of Coquitlam Sunrise, and a friend of a Rotarian from our Whitby Sunrise Rotary Club came for the experience and to see just what we do! A group of kids happy to see us

This day was a fairly easy drive.  We picked Colin up at the airport on our way out of town and drove straight to the site in a 4 x 4 pickup truck packed with lots of goodies, including our lunch.  We never know what to expect so took it with us. These villagers had all assembled and were waiting for us as we arrived, all in anticipation of what was to come.

We were not expecting such a welcome and we still had to setup the filters and label.  But they were having none of that until we were properly welcomed. It felt like We Three Kings…all the elders and VIP’s were at tables to the sides of us. beside me is Ron, sporting his blue Rotary shirt, and Colin, who we picked up right from the airport. Once the initial announcements and thank you’s were over, we took the opportunity to teach the villagers about proper hygiene and filter maintenance right there. This lady won one of our skill testing questions at the end – received a sportshirt. We didn’t realize at the time that she was the head of the women of the village. Ron, from the Coquitlam Sunrise Rotary Club, putting our donor labels on the filters Filters unpackaged, labelled and ready to go – 130 of them. Without our many donors, these villagers would continue to suffer the rest of their lives. We kept two for the school too. Even the kids knew that they weren’t going to have diarrhea any more. One of these was donated by the Durham Beer Run Club.

The day ended with many thank you’s, a baci, plus lots of Lao Lao whiskey, Beer Lao and dancing. That was a heck of a first day!  Nobody complained of a hangover but I suspect there were a couple.

The next day was a very long day into the mountains and we tried to take pictures of the ride up to the village but there was just no way.  The road was pretty bad – glad we used a truck..even then the tires were slipping and sliding in spots.  It was worth the trip of course but after 3 very long hours, it was tough on the back for those in the back of the truck.  When we arrived, the villagers of Ban Lao Lao were few and far between.  As we understand, they knew we were coming but because it is such a remote village, with rare interaction with the outside world, they don’t understand what days of the week are, let alone days of the month.  One day is the same as the next for them so I don’t think they new exactly when we were coming.

Because it is so far, we were very limited with time in the village.  We sent a villager around with our loudspeaker to gather the villagers while the three of us set up water filters under the hot sun, and two villagers put up a tarp we had brought.  It took forever to gather the villagers so some of them missed the training.  We did get their neighbors to promise to teach them on our behalf but I will have to go back to ensure the filters are getting cleaned properly and used.

As a result we didn’t really have time to get pictures other than the families themselves. This Hmong Village is very shy. It was difficult to get them to pose for the camera, let alone smile. Still, they were very grateful.

Unfortunately, we couldn’t stay for the baci they were preparing for us.  It took so long to get the pictures of the families, we had to leave be 3pm to ensure we could get back to the main road by dark.  I had visions of eating fat soup for dinner and sleeping on a mud floor, although I have done it before…but our guests hadn’t.

Concurrently, we have two large projects happening at the same time.  The David Howe Cultural Centre is nearing completion but I haven’t been up there to see the progress yet.  I think we will head up that way on Christmas Eve, spend the night in Nong Khiaw, and visit on Christmas Day.  I will get pictures of course.

The other large project that is well underway is the PhouKoud water project.  This will bring a permanent source of water from the Thong Thuen Water Tank, located about 6.7 km further up and into the mountains, where we did last year’s water project. There will be two substations to reduce the water pressure in the pipe and taps throughout the village.  Initially, the engineer had estimated 6.3km but we got the call yesterday that they needed another 400 metres…good job we had a contingency fund.  This project is funded primarily by Rotary Clubs in Southern Ontario, but there will be more about this in a future blog entry. Water pipe being unloaded from one of the trucks. You can imagine the weight of it. It takes four people. They look like a pretty proud group, don’t you think? We passed these villagers on the way to Ban La La. The villagers were hard at work, as you can see. It is rather interesting – it takes three people to hold the pipe and unwind it as the 4th person pulls it into the forest along the intended route.  I have been told that water is already running to the upper part of the village.  The two parts of PhouKoud are almost a km apart. Trenching in Thong Thuen, for the long journey to the PhouKhoud…6.7km away. Each family is required to provide labour.  It is interesting to note that the Hmong men and women participate in trenching.  In Khmu villages, it is usually just the women. A junior villager watches on as the work progresses.