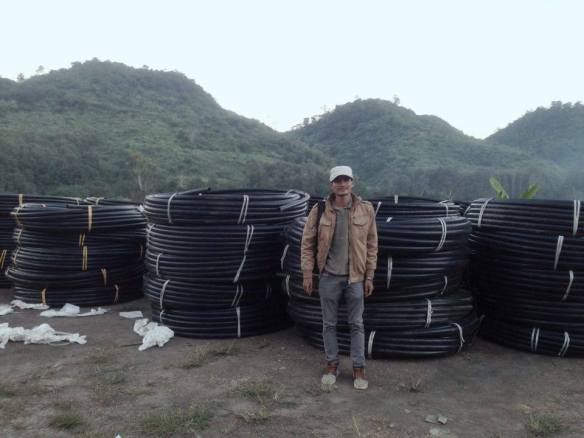 Happy New Years to Everyone…I trust everyone has had their best holiday season ever?

There has been a lot of activity since arriving back to Laos in late November.  I have tried to keep up but as you can see, the blog entries have been few and far between.  Nursing a bad cold and a touch of bronchitis (along with just about everyone I know here), I am well on the mend but will be wearing a facemask to make sure I don’t pass it onto our guests.

While it was a tough year for fundraising, we had a number of donations come through at the last minute that allowed us to go ahead with the planned water project.  With a combination of individual Rotary Club donations, a Rotary District Matching Grant, and many private donors, we were able to raise the funds needed.  This was a huge relief.  As a result, we have shipped 98% of the materials up to the rural village of Thong Thuen including a little over 9km of pipe. The trucks from Vientiane were off loaded to a staging area about 3 hours from the destination, where the villagers set up an overnight watch to make sure everything was still there in the morning.  The trucks to the village were much smaller. The roads had significantly deteriorated during the monsoon season but eventually made it to Thong Thuen. Fortunately just one truck broke down on the way back (empty). Still, it was hours of waiting for assistance, as Siphan can attest.  That is a lot of pipe.

Once that was done, we had to worry about a planned trip for a large group of visitors, primarily from Canada.  Realizing that there was no way our minivans were going to make it up the terrible roads, and that tractors or small open trucks were going to be suitable, the villagers have repaired some of the road damage.  Even with that, it was decided to rent 4 x 4’s to give our guests at least some level of comfort…

So next it was our duty to do our Christmas distribution of water filters to 251 families (including one for a school).  The villages of Khon Kheun and Thand Khand were completed.  One of the villages was located across the river from Pak Jeem that we had done 2 years earlier and the other was a further 45 minutes past Pak Jeem (near the new dam).  The last few km’s were a little rough but not as bad as I was expecting.  Here are some highlites. Arrival of the filters to Pak Jeem. Now THAT’s a big truck! Filters being readied for distribution with the addition of toothbrushes, toothpaste, labelling etc. You can see one of our volunteers, Bob, a Canadian now living in Thailand.  Kevin from Saskatchewan was also there..somewhere. We are ready to go! This one was distributed to the school. (A new one is under construction) A sampling of students from the school The start of hygiene training for the villagers in Thand Khand Who wouldn’t want to wash their hands after I poured the bacteria (sparkles) on their hands? Everyone was happy to share the same bucket of water to wash..needless to say, not only did a lot of bacteria (sparkles) stay on the hands, they picked up more (different colours) from others. We got the point across to use the water from the filter, not from a shared bucket. With Bob, Kevin, Siphan, Khamdy and myself, we wait for the rest of the large crowd of elders to enter before starting the Baci ceremony.

Since then, we have celebrated Christmas and New Years.  Meanwhile, the District Water Engineer arrived to the village of Thong Thuen.  Every single villager that could work, helped to run over 9km of pipe, through rough terrain and across a small river (a pipe bridge still has to be built across the river) did it in just 2 1/2 days.  We received over a dozen phone calls from the village that day.  To say they were euphoric would be an understatement.  They have only imagined water running to their village, in their dreams.

With running water, the focus is on the dam and the water tank, followed by the tap stations and village piping.

The first of our large group of guests has arrived.  We will be receiving many more over the coming days, at which point a new journey begins…stay tuned.