4 days, 3 nights in the Rural Villages 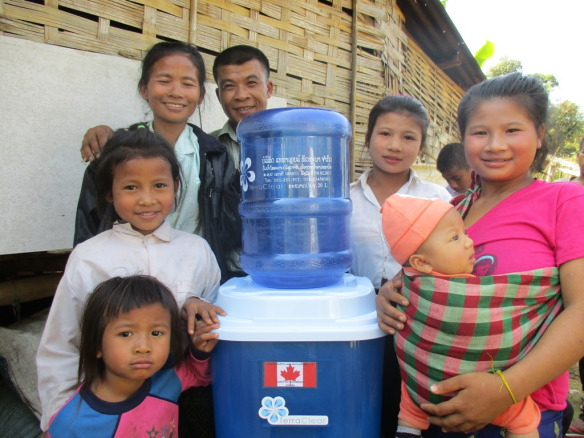 It has been a while since our last update and I attribute that to poor internet here.  I paid $140 US for fast internet (per month for 3 months) and it was fine for about 5 weeks and now I am lucky if I can even log on.

We managed to return to Nong Boakham for the final round of filters for the village.  Those who have read my previous entry about this village wil remember that not everyone was there to receive their filters, and several had been broken in transit.  So we were finally able to complete the village. She would make an amazing poster child, don’t you think? As you can see, some of the families are pretty large, and all living in a small bamboo shack

With the arrival of our two newst visitors from The Rotary Club of Scarborough, we were excited for our next adventure,  Joan and John have been a delight to be with and while Joan is well seasoned, working in third world countries, I think it has been an eye-opener for John in some respects. John and Joan, from Scarborough, Ontario

We started with an easy day by taking them to Kwangsi Water Falls and Bear Reserve, just 45 minutes from Luang Prabang.  Along the way though we stopped at a secondary school to review there request for additional rooms.  We looked at the sight and they had already installed the posts and roof.  Their request was for $4,000 US to finish the school.  Upon closer inspection, we found a lot of issues with their request.  First, the posts were very small, and the roof trusses and support beams were much too thin to hold the roof during the heavy monsoon rains so we would need to double up on the wood to give it stability.  The other issue was that there was no overhang to speak of…roof overhangs of at least 2 1/2 metres are standard with every school.  Despite our concerns, we spent the next day reviewing their request and putting together a full materials lists.  Our estimates were just over $18,000 US without consideration for school furniture or the material needed to shore up the roof.  We would also have to either rebuild the roof or construct a separate overhang.  In summary, I really don’t want to put our name on something that I consider to be substandard.  Their reason for putting in a much lower price was because they couldn’t attract any NGO’s to assist them. Current structure, completed just a month ago. You ay be able to see the very basic construction of the roof.

After dinner and a good nights rest for our guests, we took them to the UXO Office (Unexploded Ordinance Museum).  To see the movie, still pulls at my heart strings.  The secret war was such a disaster for everyone and an embarassment for the US. Afterwards we headed back to my house and sorted through all the goodies our guests had brought, in preparation for our trip.  Here are just a few of the items. The following morning we started out 4 day, 3 night road trip to various villages. Nothing is easy to get to of course so we took our time.  Our first stop was to visit a kindergarten in Phonsavanh and to distribute uniforms for a rather large team.  I have video too. Cute as a button.  Joan was rather impressed with the layout of the room…everything in its proper place. Lots of goodies handed out, courtesy of our fellow Rotarians and friends from Scarborough Thanks to Afrisoccer in Whitby, Ontario, who receives used uniforms from the local sports teams, thse uniforms have a second life! We watched them playing too…it was hard to imagine 24 kids running after the ball..until now!

One of the trip highlites and reasons that Joan and John came was to teach feminine hygiene and general hygiene to the secondary school girls. During secondary and high school, many of the girls drop out, often because the girls are embarassed during that special time of the month.  As cheap as they are, many can’t afford to buy the hygiene pads in these rural villages so we decided to start a test project for a year in hopes that more girls will attend school and the dropout rate will fall, especially if we provide the pads for them (on a quarterly basis). 108 girls all crammed into one classroom.  John must have been making funny faces outside the classroom…kidding…we put him to work doing something else. I started the session by teaching about bacteria, using my sparkle demonstration as described in my previous posts. Then I made a hasty exit so the girls wouldn’t be embarassed that I was there. Joan continued the course through our wonderful translator and Siphan’s wife, Leung. Leung has been a teacher and was well respected. I had actually thought that one of the ladies would come and do the handouts but they all seemed to disappear! As it happened, the day we arrived was the same day the school hosted a volleyball tournament. This kept the boys occupied and was a lot of fun to watch – lots of commaraderie, singing, chanting…just like home!

We also walked around the back of the school to take a peek at the dormitories.  It is a rural village to begin with but many come from even smaller villages to live and go to school. Standing outside one of the miniature huts. They cook and sleep here – minimum two students per bamboo hut. We did notice that a dormitory was under construction You will notice all the huts crammed together It is hard to imagine but with the new dorm, the kids have even less personal space but at least it is permanent and dry.

We continued up to complete distribution of our last water filters and then to Katang Xieng for an inspection. The addition to the Katang Xieng School is well underway. Tonight we will take our guests to a Lao BBQ.  That should be interesting.