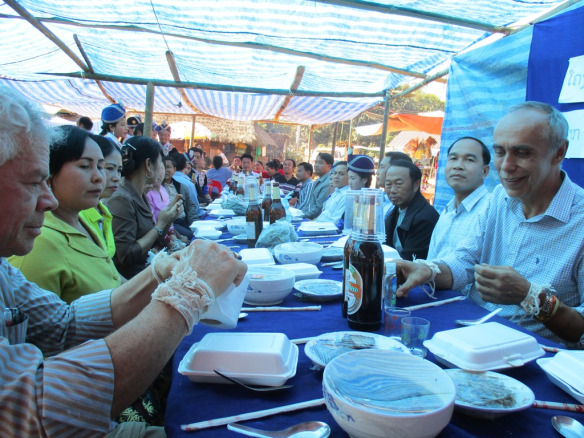 It is difficult to take pictures while being part of the celebration.  The ceremony itself started with the arrival of the District Governor, District Hygiene Director and so on down the line.  There were a few speeches, Hmong Dance and then the Governor spoke.  He was very eloquent and spent most of his time speaking about the care and maintenance of the new water system, starting with the phrase ‘Water is Life’.  Towards the end, he spoke about the advances in the country over the last year, discussing the new railway that is under construction and the Lao-hosted Asean summit coming soon, with President Obama attending.  We were really impressed!  The village gave the governor a very long update on their accomplishments over the year and handed out awards.  I handed over the inaugural pipe wrench to conclude our project and officially hand over ownership and responsibilities.  Here are a few highlites; Mmmmm….delicious goats blood..NOT!  The rest of the dishes include rice of course plus various goat dishes. You will note that in my right hand I just put down the hand sanitizer – since everyone shares with their hands, I took the liberty of giving some to everyone around me…including the governor beside me. Todays food included mostly beef – I stuck with sticky rice and bbq’d beef that I could recognize. Gary generally ate everything he laid his eyes on except the buffalo bile… My presentation of the pipe wrench to the Governor and on to the chief. Here I am receiving a framed certificate on behalf of the government with their sincerest thanks for our support.  There is a certificte there for Serena and Massimo from Italy also. Unfortunately, they had to return to Italy early due to a very sad and sudden death of Serena’s brother. Traditional Hmong dance…quite amazing – wish we understood the story he was telling us through dance. I think the boys represented animals with their horns but the Hmong culture is so different and both the Khmu and Lao people do not understand it. A gift of a beautiful scarf by the chief on behalf of the village. The sign was installed on a temporary basis – the permanent cement posts will be done this week.  The sign is located as one enters the village.

We are so humbled by the support we have received from Rotary Clubs right across the country from Vancouver Yaletown and Coquitlam Sunrise, British Columbia to Lunenburg, Nova Scotia. In addition to the Interact Club of Clarington and the Rotoract Club of DC/UOIT.  District 7070 clubs included a matching District Grant and funds from The rotary Clubs of Bowmanville, Whitby Sunrise, Pickering, Ajax, Courtice, Etobicoke, Markham-Unionville, North York, Oshawa Parkwood, Port Hope, Richmond Hill, Scarborough, Scarborough North, Toronto, Toronto West, Whitby and Uxbridge.  It is amazing what we can accomplish together!