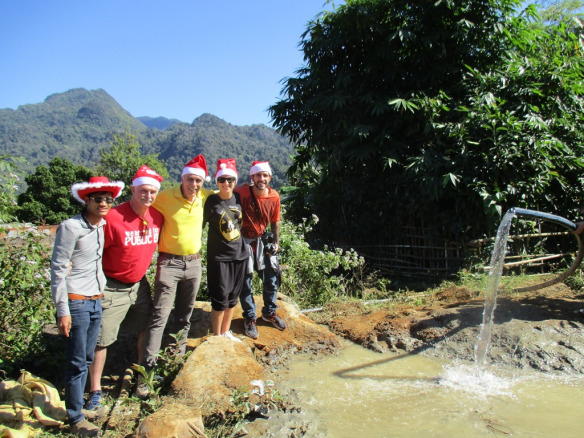 With the near completion of the first distribution of water filters to Nong Boakham, I spent the next two days emailing everyone in time for Christmas….just made it.  It helped that I spent a little more to get high speed internet.  Instead of taking 4-5 minutes per pictures, it took about 15 seconds each.

So Christmas came quickly – Our team celebrated our Christmas dinner at the Mango Garden restaurant – glad we made reservations. From left: Siphan, Oudone (university student), Massimo and Serena from Italy (Ink for Charity), Art from Boone, North Carolina, myself and Boun (last year of high school), sponsored by a friend of mine, Gary Thompson who arrived late last night from Richmond Hill, Canada

We had heard that rain was coming to Vieng Hin in two days, so we wasted no time.  On December 26, we went up there to inspect the progress and check in on a cuple of other villagers while we were up that way.  Of course we took our Santa hats too. In just 4 days, the villagers had trenched 7km of ditch and laid the pipe – water was already running. Note the water tank under construction. They planned to start mixing the cement and pouring, the following day. The hats were a big hit. Siphan is standing with the engineer and the village chief Rather sobering – bomb oridnance right outside the school…perhaps as a reminder to the students of their history. We are considering building a school here net year – you can get a glimpse of the condition of this one…lots of termites too.

The chief was kind enough to take us to the caves where the villagers and the entire district ran to for cover during the bombing raids.  More than a thousand people lived in one cave (there are three) for year.  I will be showing a video of the caves upon my return but here are a couple of pictures. Trekking to the biggest cave. More than 1000 people stayed in this cave because it had a source of fresh water, water falls, a place to cook and even fish. The chief went to great lengths to talk about the helicopters with rocket launchers.  So many people didn’t make it to the caves.  Mind you, the local villagers kept this place a secret so their enemies wouldn’t give away the location.

On our way back to Luang Prabang, we visited Ban Na Lea to check in on the school, the water project (completed the previous year) and one of the sponsored students.  The path to the village was washed away in many parts and no makeshift bridge across the river.  Once we got there, we noticed one boy pretty much by himself but other kids were helping him to move around.  A closer inspection revealed that the kid was legally blind.  He got  virus when he was 9 months old (he is now 12 years), and had to have one eye removed.  With the other eye, he can see a little motion only.  This was very emotional to see, especially in a village who could offer him no hope whatsoever for the future.  At least he has been stable for the last several years. We are currently investigating to see if anything can be done and will take him (and his father) to Thailand when I have to exit the country. I sure hope we can do something for him.  It is so disheartening to see this and to know that nobody seems to care…even the father seems to have written him off.  There wasn’t a dry eye among our volunteers when we were told this.

If not there are blind schools that he may be able to attend and perhaps we will fundraise for support.  The uneducated father basically offered his child to me…so sad.

After they served us a lunch of freshly slaughtered and cooked chicken, along with Lao Lao and Beer Lao (cost me three cases – each equivalent to 24 bottled – man can they drink and we were only there for a couple of hours). It didn’t help that they kept refilling our glasses. The after effects of copious amounts of Lao Lao and beer Lao – As you can see, Serena must have been a bit tipsy…LOL

On to our next adventure!