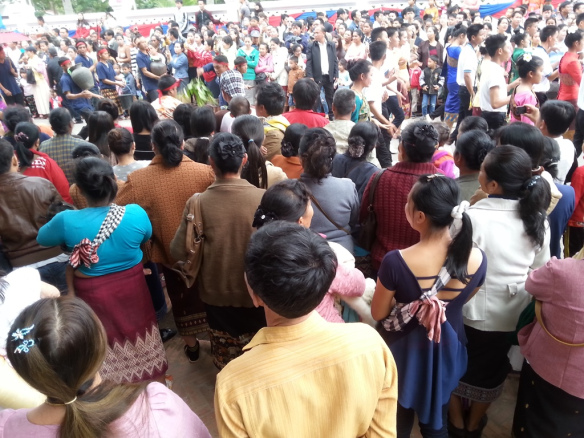 It has been a busy week with two Lao holidays and progress with our water project.  Monday was a National Holiday with the celebration of Lao Independence…40 years!  It rained so the festivities were moved to the new stadium which doesn’t have spectator seats..only government invited.  Still, it didn’t stop the celebrations with copious amounts of Beer Lao and loud music.  Secondly, there was the parade on Wednesday to celebrate the 20th anniversary of Luang Prabang’s Unesco Heritage Designation.  Now that was a sight to see.  I think the entire population of the city was there to witness, along with neighboring villages…I couldn’t move!  I found it strange in that one would normally wait along the parade route for the procession to arrive but the parade was so long that the participants lined up at least 3/4 of the way into the parade route itself.  Those people had a very short walk to the end.  The highlite for me was watching a team of 4-5 years olds paddling a boat (on  float), led by this kid that couldn’t have been more than four years old…the little guy was really good too, shouting out orders yet keeping up the pace.  Here are a few of the pictures. Entrants lined up at the start of the parade…the best time to take pictures..you will see why.  Thousands and thousands of participants. Did I say I couldn’t move? This is why – almost impossible to take good pictures.  Thousands and Thousands of onlookers… Again, this group was awaiting the start of the parade. This was the highlight for sure. More than 20 elephants had made the trek 240 km away just to participate in this parade.

I should note that I was there for the 15th anniversary – it is amazing how time flies.  Meanwhile, poor Siphan tried to make it back in time from the village of Vieng Hin.  He coordinated the transportation of 25 truckloads of sand, gravel, steel rods and cement.  It rained on and off durng these days, and delaying the transport due to terrible road conditions. The roads were primarily mud and on dangerous hills. The drivers and village chief with Siphan enjoying a meal before the work begins. one of many truckloads The last of the truck for the day, carrying cement. No deliveries after dark, for good reason.  The Hmong Village Chief poses for the camera.

Today Siphan will return to the transfer point with the expectation of arrival of the water pipe early tomorrow morning.  That is expected to require 10 trucks, over 7km of pipe…

Last night, Art Quickenton arrived to assist us with the projects for the next two weeks, especially for the water filter distribution of 257 filters. This is an ‘all hands on deck’ affair.  We may even convince a couple of other tourists to come with us…but first, welcome Art! We managed to take him for a quick meal before he headed straight to bed after his long journey.  From the left, myself, Oudone (one of our university students who never declines a free meal), Siphan, Art and Serena (from Italy).  Massimo, her husband is the photographer.