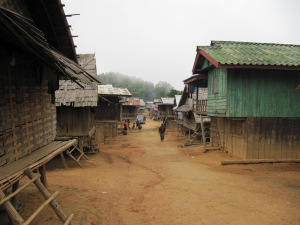 Thanks to the generous support from the Rotary Club of Whitby Sunrise, we have completed about 90% of the project to bring water to the village.  As mentioned one of my previous posts, just trekking to the water source was difficult at best.  We built a dam, ran several km’s of pipe, built a water tank for the village and 4 taps for this village of 55 families.  During the last visit they had only 2 of the taps working because they were still waiting for the water tank to cure before using it, so they bypassed the tank to get some water directly to those taps.  One unusual discovery was that the water pressure slowed significantly by this old tree and it was blamed by the villagers on the tree spirit.  It didn’t take long to figure out what the problem was (the pipe took a significant turn uphill at that point instead of a gradual slope) but to ensure we didn’t interfere with the culture of the village,  a special ceremony was arranged to please the tree spirit (along with the necessary redirection of the pipe of course). The Remote Highlands Village of PhonSavanh The tough trek to the water source for PhonSavanh - actually this area wasn't so bad. The source of the water for the village - doesn't look like much! Plans for a new dam are underway in this picture. The water source sure doesn't look like it will be sufficient but who am I to judge. During our last visit! It is hard to believe isn't it? the two showers are going non stop. They sure seem to enjoy the water! The people odour was gone too. The Tree Spirit slowed the flow of water at this point?? Following the newly laid pipe to the water source The water flow coming from the newly constructed dam - what a surprise! The DAM! Hard to believe that that little trickle of a stream could capture this much water - and with the showers going full time. The villagers Thank You from the bottom of their hearts. Special Thanks to the Rotary Clubs of Whitby Sunrise, Toronto and Scarborough and so many individual donors. A Closer View of the names of our generous donors. See the line up for the showers? Even the cow waits patiently for it's turn Kids having fun with a cut-out bottle to use as a slide.