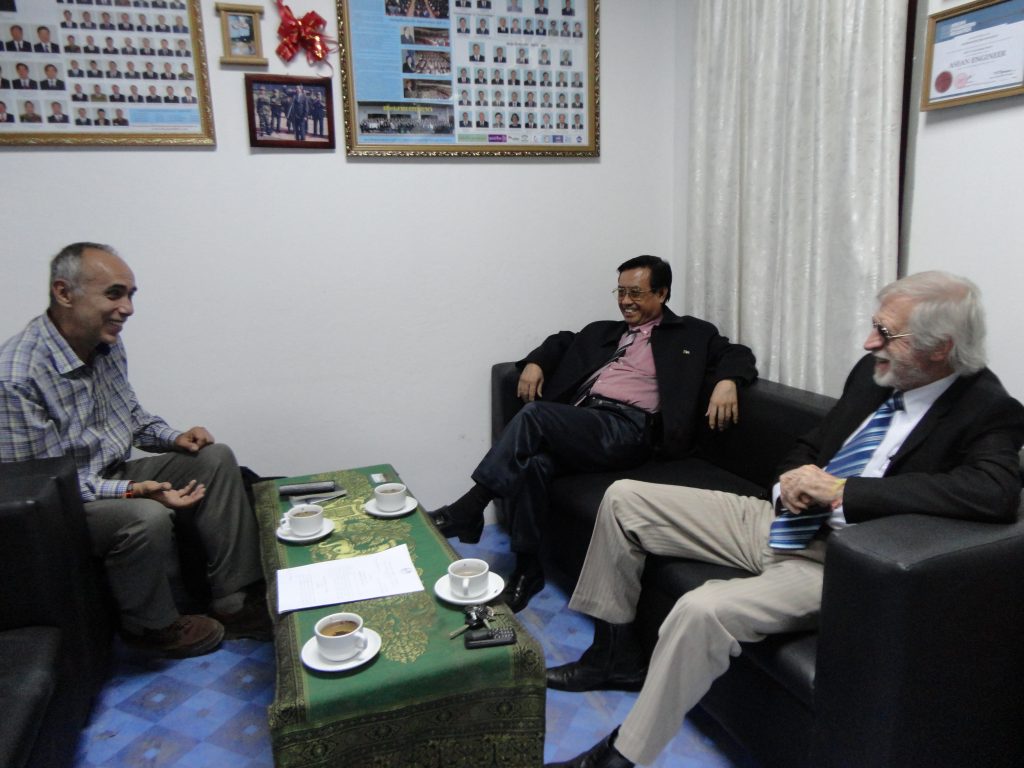 It was time to take the trip to Vientiane for a number of reasons but primarily to inform the Ministry of Foreign Affairs what we were planning this year. I booked the flight but had to book executive class to my surprise – I didn’t even know there was a plane here that was big enough to have different classes of service. It turned out that Lao airlines now has an A310 flying to Paris and back with a stop of in LPB.  Instead of 40 minutes, it was supposed to be 20 minutes.  In reality the flight got cancelled and they had to give me a refund for the difference.

We arrived in Vientiane nothing went right the first day other than some shopping that we managed to get done – We were to meet the Permanent Secretary of the National Science Council and Assistant Advisor to the Prime Minister and Rotarian, to assist us in submitting to Foreign Affairs but the meeting was delayed to 4pm (when most offices close), we ended up at the wrong building causing another half hour walk and by that time, he was in another meeting.  So with a brief hello and an offering of documents to us, the meeting was rescheduled for the next day.  Bounmy did get a chance to go to the Khmu radio station to introduce himself and say hello – these are the folks that allow us at least some contact with the villages by making announcements for us.  They put him straight on the air and interviewed him.  I know what it must have been like – been there…done that.  He was nervous to say the least but did well from what I understand. The next day I was able to find a good reasonable source for bicycles that I need for a couple of villages, did not find the blackboards that I have been searching for and finally met with the National Science Council Permanent Secretary, Ir. Somphone Phanousith.  He brought in fellow Rotarian Prof. Francois Polidano (France) who also works in the Prime Ministers Office. We did not manage to get to the Foreign Affairs office at all but I was requested to send the information by email to Mr. Somphone and he would process it on behalf of me.  We discussed Rotary and their function in Laos, their challenges and their structure.

One thing we tried to do was pick up some malarone, a malaria prevention drug, to replenish Sean’s supply.  We did find a childs version meaning that 4 pills would have to be taken daily instead of one and they were very expensive.  The main drug they sell for this is Chloroquin – it works in places like Central America but not Asia because the mosquitos have developed a resistance to it.  So the only other possibility is to get the drug in Thailand.  So if you are coming to Laos, bring your Malarone with you!

The next morning we headed to a city I have wanted to visit for a while now….Pakse.  I was surprised at the wealth of not just the city itself but the surrounding area.  The trip was just a sightseeing trip and also to get 2 days of down time. We headed to what is identified as the largest waterfalls in Asia.  In fact the driver tried to make a comparison to Niagara Falls….hmmmm….not so sure about that one.  Let’s see what you think. 'The Jewel of Asia' located about 2 hours from Pakse Bounmy's required reading in Primary 2 was about these falls.

We were supposed to head over to an ancient temple afterwards and we got to the riverbank where we were to drive down to the shore (many people got stuck in the sand) but it wasn’t to be.  The van overheated and it took another 3 hours so we had to head back to Pakse.

The next day however, with a replacement vehicle we did manage to see the temple, although we had to cancel the rest of our tour plans due to the previous days mishap.  Here are some highlites; South Laos is surprisingly flat - roads are certainly better too.

The night of our return I managed to have dinner with some rotarians from the Whitby Sunrise Club (Diane Allen) her sister and husband from the Cobourg club and a doctor after they just completed a sweat equity trip in Cambodia with my dear friend Lisa McCoy from the Gravenhurst club.  I never thought to brig my camera – sorry!