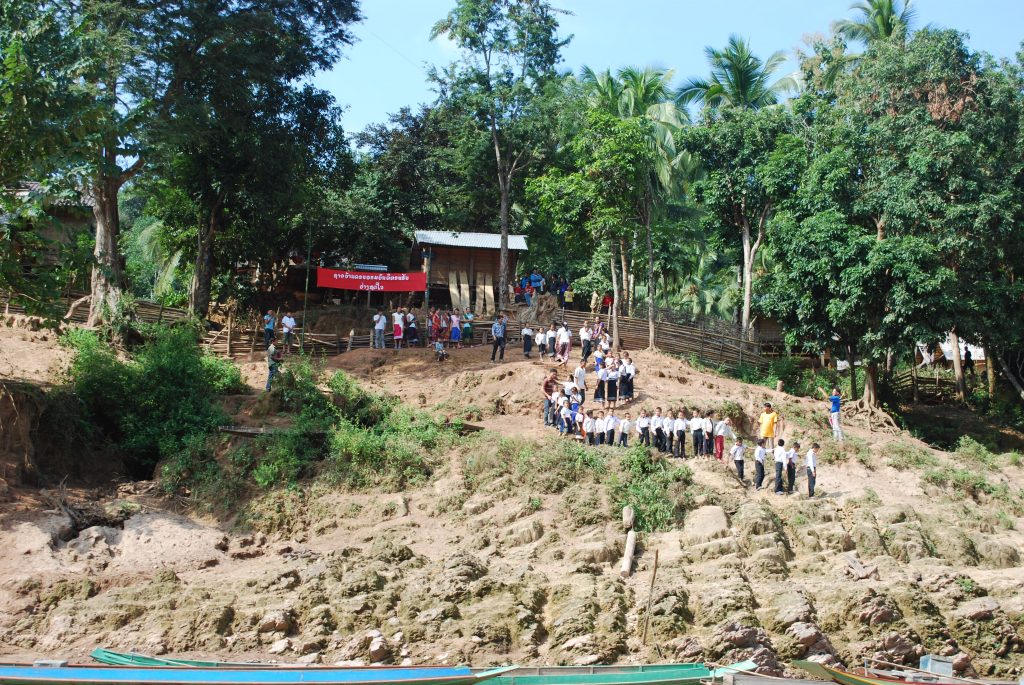 I made it through the first two weeks and managed to get a lot accomplished already although I am still behind the 8ball so-to-speak.  My hope is to get some, preferably all of the new projects completed before the rainy season.  Last season was just too difficult for many in terms of transportation and access, illness etc.

My first encounter was at the Hanoi airport – I was supposed to be there for 10 hours although it turned into just over 13 hours because they cancelled the first flight of the day, so I spent the night there with 100’s of very fat, but fast rats.  Once the lights went dim, they were everywhere climbing the shelves in the retail shops, scurrying across the floor and even above the ceiling tiles over my head – not terribly comfortable for sleeping if you aren’t used to that sort of thing.

Since then Sean Holt has joined me from Squamish, British Columbia to assist in the projects.  I have tried to bring him slowly into the customs, starting with accommodation in a fairly modern house, then staying in a tourist hut and taking day trips into the villages.  Our next trip will include a village stay so that should be interesting without any of the ammenties of the city.  Welcome Sean! After the women already!

Next up….La and her sister Noel from the Jai Lao Foundation (‘Jai’ means from the heart) joined us with the winner of the essay contest, Daravanh Bills and her husband Reynold. We headed straight for Nong Khiaw by minivan, then by boat to Muang Ngoi where we found a reasonable place to stay with hot water electricity for at least some of the day.  Bounmy continued up to a riverside village another 45 minutes upstream to prepare for our arrival the following day in Done Lom Village where the official opening ceremony of the school was to take place.  I was quite surprised by how well planned the event was when we arrived.  The villagers lined up the paths right from the boat, up the riverbank and into the village – what a sight…Another dream come true was about to unfold.  There it was!  The school!  I remember seeing pictures of the villagers gathering gravel from the riverbed (one stone at a time) to take up to the school site.  I also remember the first time we saw the land they were going to use and the area had red markings on the trees to label the area that was to be checked by the UXO office for unexploded ordinance.  Guess what??  They found some!!  Thank God we had the sense not to go into the area at that time.  More about that later.  Here are a few images; The Adults turn to greet us Inside the first classroom Master of CeremoniesStudents in uniform for the ceremony

One of the things I noticed on this visit was that the men seemed a little subdued, perhaps even a bit cranky…then I found out why.  They insisted on slaughtering this cow for us and finally found it around 11pm the night before.  Unfortunately they realized after they shot it that it was the daughter of the cow they were looking for.  The women (yes at 11pm) prepared the cow for cooking and then realized that it wasn’t enough.  The men then had to go out to look for the original cow – they finally found it at around 4am, just when the chief was about to wake up all the women in the village too, to look for the cow.  Needless to say, nobody had any sleep the night before we came.  As it turned out, a couple of still drinks of Lao Lao and they were happy again! Gift Offering by the Village Chief What would a celebration be without Baci! Noel enjoying the event too! Dinner with a few friends, OK well maybe more than a few Moms enjoying a performance by their daughters Performance by some of the children in traditional clothing

Reynold and his assigned dance partner Some of the school kids pose, with thanks to our school sponsors Done Lom Kids ran to the shore to see us off.

Here are a couple of pictures you don’t see very day.  It was a little shocking to me and the visitors that came with us but we noticed a couple of markings in the ground, one just about 6 feet (2 metres) from the front of the school, the other was about 3 metres from the back of the school.  I supposed shock was an understatement.  These markings identified the location of where the UXO office had located 2 unexploded bombies!  They put permanent makers in the ground (after removal) to remind everyone of their history. Original bombie located just to the right of the school front