Last Distribution of Water Filters for the Season 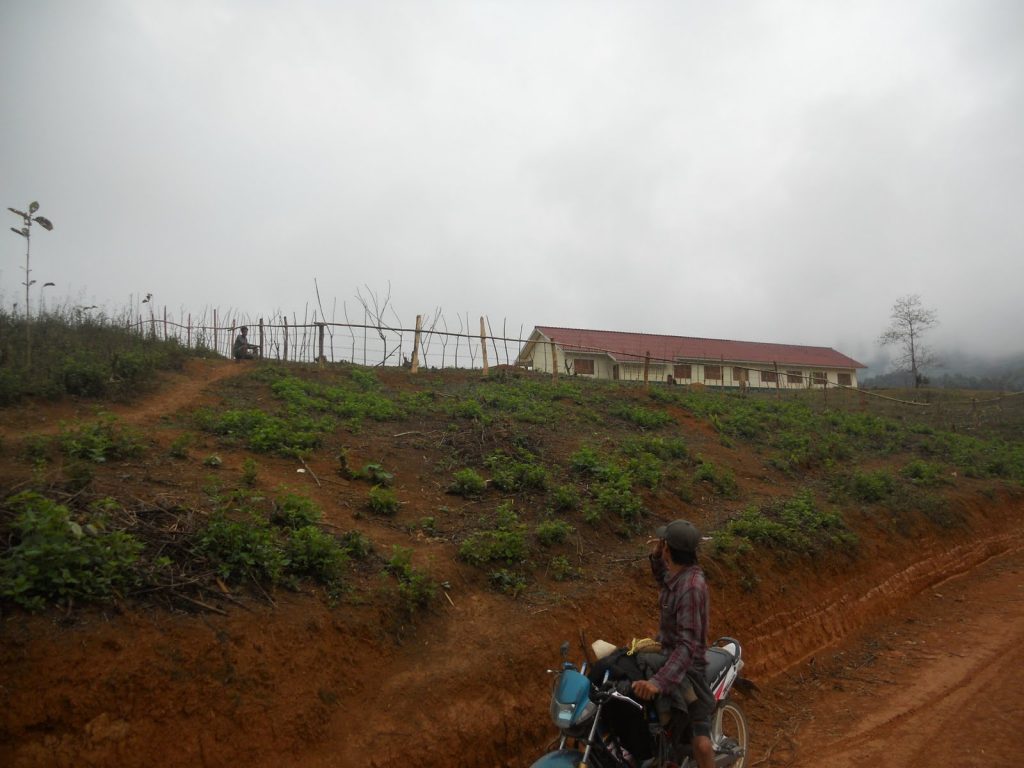 My Last week in Laos was indeed an interesting one and it was a strong reminder
of why I was there in the first place, not that I ever forgot of course. Most of
my work is generally drudge work requiring lots of planning, organizing,
purchasing, banking, accounting, fact gathering, proposals and many, many other
things that tend to fill up my days. BUT it is moments like these, I cherish and
many of you will too. First up was during my last visit to Pha Yong Village. I
had not been there in about a month and I knew the chief had been trying to get
a letter of request down to me in Luang Prabang for 24 rolls of barbed wire to
be able to build a fence around the school and field and keep the water buffalo
and pigs out of the school yard. Mike and I were happy to sponsor this and so I
arranged for the delivery. Once I returned to the village I was so pleasantly
surprised to see that the fence was up already – it was a bg school yard and
they had done it the day before. As the chief explained, each villager was also
required to supply one wooden post and two bamboo poles. When asked how long it
took them to build the fence and gates, his response was that it took just over
two hours! Whoa….try THAT in Canada – we would probably get three quotes,
haggle over the price and complain that it was taking too long! It was a last minute thought to take pictures of the fence as we were riding away so this is just a small piece of it. Next up was a water filter distribution. I had been told earlier that a number of families had moved out of Ban Huephen in search of water for their families. It had been in our plans to provide a new water source for them but more about that later. I had extra filters and was determined to distribute them before I left. I had visited a 1300 student high school that was bursting at the seams in terms of
classroom sizes and the structure itself due to termite damage. In one of my
much earlier blog entries I included some pictures of this wooden high school.
Just two weeks before I had visited the location with a potential sponsor to
satisfy a request to complete a two room addition (separate building) to the
school and noticed some serious degradation to the support beams of the school,
to the point where one of the beams had already shifted sice I had been there
the previous time. I couldn’t bear it so I personally paid for and ordered new
massive support beams that had to be hand made and told them to use any extra
money from that to put towards a cement floor in the new addition. On this trip
I was there to teach about proper hygiene to the students and teachers and to
disribute some of the extra water filters. Somnuek Bounsa (the general manager
of Le Belair Hotel) delivered them with me in his truck and we were both shocked
when we arrived. As soon as our truck stopped on the grounds, we heard the
school bell ringing (actually it was the rim of an old truck tire) and the kids
running and lining up both sides of a pathway leading from our truck. It took us
a minute to realize they had something planned for us. All the students and
teachers lined up both sides of us that led right up to one of the new rooms and
they were clapping in unison for us. Inside the large room, bacci had been
prepared for us. All the teachers, all the graduating students and select
students from other grades had been invited to attend and each student was asked
to prepare a question for me. After bacci, I was asked all sorts of questions
about Canada, about me and one of the teachers asked my age and if I was married
– of course the entire room knew that she was looking for a husband and erupted
in laughter. Her face went various shades of red. Here are some highlites; One
of the questions asked during the question and answer period was if we provide
support for university and within an hour these four boys had already neatly
written CV’s and letters of request to us. This is just the first stage. I now
have to give them more details on the rules and subsequent competition. We gave
out 6 water filters to this school. After we left the high school we went to a
secondary school and dormitory to deliver more filters. We were met with lots of
enthusiasm here as well. I
will be back with more water filters for this dormatory. There is no water there
at all – the kids have to go down to the river to bathe. Although, there is a
new trench that has been dug and we are told that the school should be getting
water soon. We delivered the last two water filters to the derelict hospital I
included in two of my earlier blog entries. They have to bring water in since
there is none on the premises but at least the water can be used for drinking
water with the help of two new filters. Their request for a well and new
latrines is being considered as an Adopt A Village In Laos for next year. You will notice one of the patients lying in bed in the background. They
actually had four patients at the time in a 10 bed hospital. I wonder what
happens during their busy season. One Comment on “Last Distribution of Water Filters for the Season”

how much is a stamp

i love your blog, i have it in my rss reader and always like new things coming up from it.