Season 7 and We’re Off 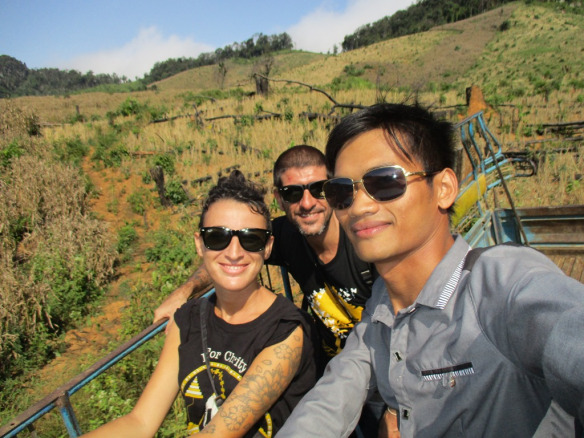 The summer and fall were quite fruitful in the presentation and fundraising area.  People and organizations seem to come from nowhere.  We had hoped to raise enough for our two main projects, plus 250 water filters for our first distribution of the season and of course support for our 17 students and teacher.  Indeed we hit all of those targets and we have enough water filters for our second water filter distribution of 200.  So for the entire year, we hope to get donations for a last distribution of 200 by June 2016.  200 is the magic number to reach for a distribution due to volume discounts and shipping costs.  The only thing I am wary of is the poor performance of a Canadian Dollar.  I am still hoping for a miracle there in order to keep us within budget but it seems like a stretch.

Ok, on to the fun stuff.  I have been here for about 1 1/2 weeks, have recovered from the jet lag and have completed our first village trip.  We had been trying to contact the village to announce our date of arrival but to no avail.  As it turns out, the village had a dispute with the telecom company so the telecom company shut off their service and link to the outside world (except by a very poorly maintained road)…I am pretty sure that wouldn’t be permitted in our country.

Our trip was to do the final negotiations and contract signing for our first, all Rotary Funded, Water Project in Laos.  We will be watching the expenditures very closely on this one – based on the current cost to buy US, we will be $2700 over budget.  We are looking at different scenarios to save, but will see.

Fortunately, when we arrived, the 1st chief was there and the village was pretty happy to see us. They quickly arranged for a truck to take us (and the engineer who we brought) most of the way to the proposed dam site.  We only had about a 15 minute trek to the actual site and it wasn’t difficult.  Here are some pictures. Bull Fight in Vieng Hin- both owned by the chief who wanted to know which of his bulls was the strongest so he could command more money from a potential buyer…the black bull was the winner.  We saw another one loaded onto a truck and the chief mentioned that he sold it for about $2200, much larger than these.

From the left: Team Members Serena and Massimo from Italy, and Siphan, our coordinator.  Here we have begun the journey by truck towards the proposed dam location. As we continue the journey towards the dam, we are reminded that today is the 40th anniversary of Lao Independence and a holiday for most.

Further to the above captions, there used t be a Khmu Village and a Hmong Village in the area around us.  As it was described to us, the US bombing runs were particularly heavy in this area and while the villagers would run towards the caves for cover, most of the Khmu didn’t make it because they were slower than the Hmong.  The villages themselves were completely wiped out. Along the route we asked why there was a ladder that led into the sky? Any guesses? During the rice harvest, they would carry the rice up to the top and shake it to allow the chaff to blow away, leaving only the rice in a mound below…Pretty cool. We made the short trek through a barley field and down a hill into the forest…then finally to the river where the dam is to be built. I am standing with the main engineer and the village chief. Back in the chiefs hut, we discussed the terms of the agreement, and the signing. What you can’t see is that we are in the only free area of the hut with mud floor. Facing the other way is just a wooden platform stretching the full length of the hut for sleeping on.  In fact the people on the other side of the table were actually sitting on the edge of the sleeping platform.

As soon as the next guest arrives, Siphan will head back up to the area to order and deliver materials to the village.  The villagers don’t want to waste anytime, in hopes of having the project completed in time for Hmong New Year which is only a few weeks away.  More updates soon!